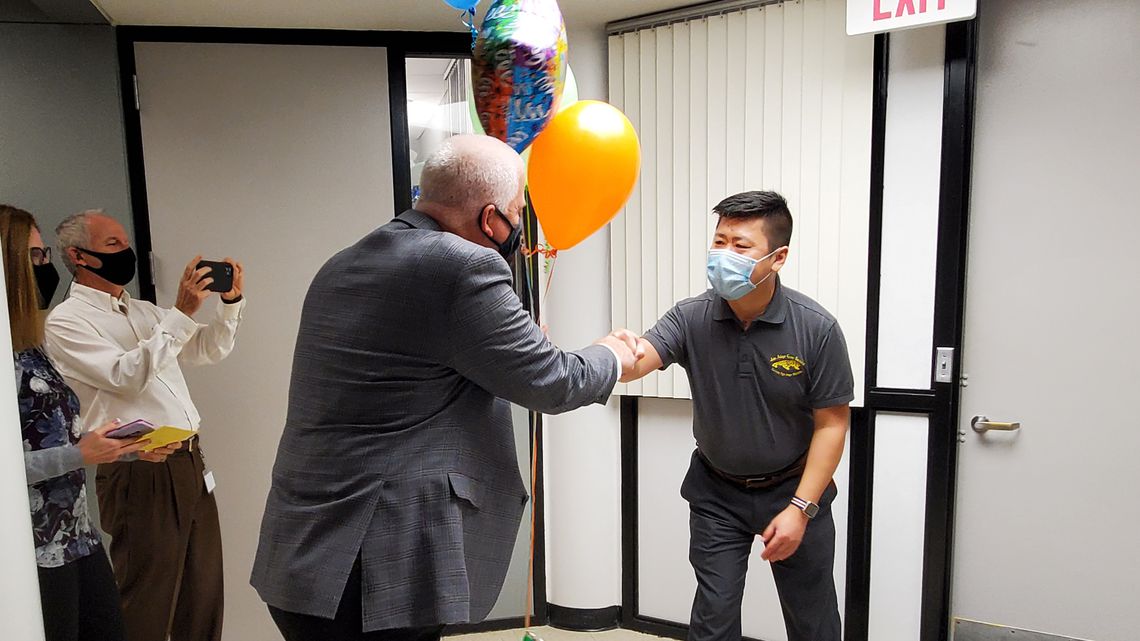 TRINITY — The crew assembled inside Seven Springs Middle School to surprise Pasco County’s 2021 teacher of the year faced a dilemma.

The well-wishers — armed with balloons, sweets and other gifts — had hoped to spring the news on Chinese language teacher Yan Li Gazda in a student-filled classroom.

But when they arrived just before 10 a.m. Wednesday, Li had a preparation period that would last for the next half hour. With plans to celebrate the district’s school-related employee of the year at 11 a.m., they improvised.

An office aide called Li and asked him to come to the main office to sign some paperwork. When he arrived minutes later, he opened the door to cheers as superintendent Kurt Browning delivered the news.

“Oh my gosh,” Li said, as he fist-bumped the superintendent. “This is too much. What should I say? This is such a great honor.”

He proceeded with an impromptu speech about how the annual award might recognize him personally, but he only represents all the teachers throughout the district who do great things without attention. He also spoke of being an immigrant, having grown up in China and studied in the Netherlands before arriving in the United States, where he chose to become a teacher like his sister, brother-in-law and other family members.

He began as a substitute in 2012, becoming a language arts instructor a couple of years later and then launching his school’s Chinese language elective program, which now includes three levels. Li is Pasco County’s only Chinese teacher, and his school’s first teacher of the year district winner.

“America allows me to do the best of me,” he said. “I could not have done this in another place.”

Browning said he was struck by Li’s love of the United States, and his effort to take advantage of his freedoms to become an educator.

“I am thrilled he is in our district doing great things for our kids,” Browning said.

So, too, were the students who have taken his classes.

“He’s just an amazing teacher,” said eighth-grader Alexa Michael, in her third year of Chinese with Li. “He makes it easy to learn such a hard language.”

Eighth-grader Alex Bekas, also taking Chinese 3 with Li, said his teacher explains lessons clearly and thoroughly, and infuses culture into the materials, too. Some in the class had planned to travel to China with Li, and he was preparing them.

“He is super nice,” Bekas said. “It’s hard, but with him as a teacher, he makes it easy to understand.”

Li said making positive connections with students is perhaps his favorite part of the job.

“The kids are so lovely,” he said, noting that as an elective teacher he can see the same children grow in his classes year after year.

Sometimes they come back from high school to visit, he added.

Li will next compete for statewide teacher of the year honors. Pasco last had a finalist for the state award in 2016.

Photo: Yan Li Gazda, a Chinese instructor at Seven Springs Middle School, receives a surprise visit Wednesday from superintendent Kurt Browning and others, who let him know he was chosen Pasco County’s 2021 Teacher of the Year. [ JEFFREY S. SOLOCHEK | Times ] 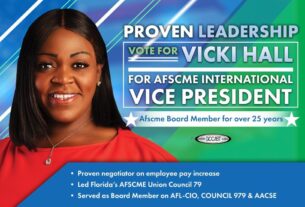 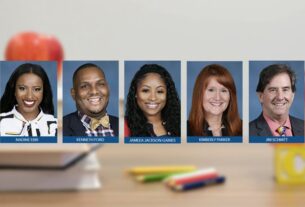 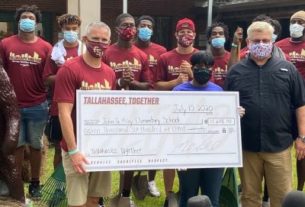