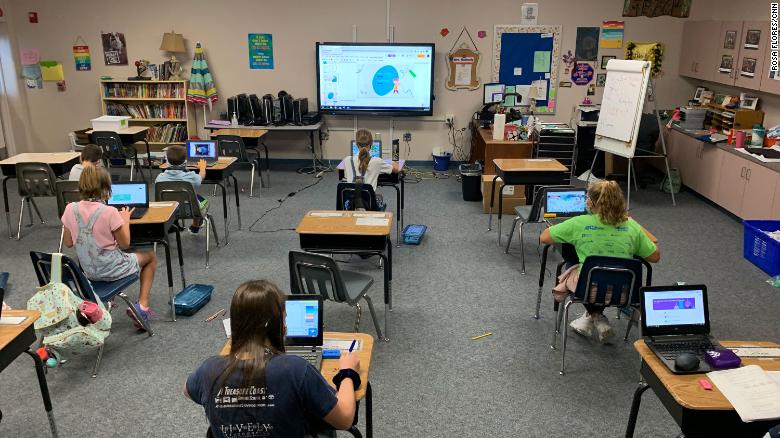 Martin County, Florida Since many Florida public schools opened their doors about a month ago, the number of children under 18 who have contracted Covid-19 statewide has jumped 26%, state data show.Gov. Ron DeSantis continues to push for in-person instruction across the Sunshine State. Even though his administration has released county-level data that indicates the 26% jump, it has not released school-level Covid-19 data for all K-12 public schools, which CNN began asking the state Department of Health for on August 31. On September 2 — nearly two weeks ago — state officials said by email the data would be released in the coming days and weeks.But still, the state hasn’t provided this key information.

A classroom at Jensen Beach Elementary School. Administrators say parents were warned social distancing would not be possible at all times.To deal with this information gap, some school districts have created their own Covid-19 data dashboards or released coronavirus case numbers on social media pages or their websites. While useful in those jurisdictions, the overall result is a patchwork of data that varies in completeness and timeliness by district at a time when students, parents, teachers and administrators are making tough decisions about whether to opt for virtual or in-person learning.

It’s a problem that reverberates across the US as the White House and federal agencies come down hard in favor of reopening schools but often fail to give reliable information to those on the front lines.

On campus, ‘people were breaking the rules’

Florida began reopening schools August 10. On that day, 42,761 children under 18 statewide were infected with the coronavirus, the state Department of Health reported.

That week, nine of 12 school districts opening their doors were in counties with positivity rates above 5%, the uppermost threshold recommended by the Centers for Disease Control and Prevention for schools to offer in-person learning.

CNN confirmed the list of districts that planned to open as provided by an attorney for the Florida Education Association and confirmed positivity rates with the Florida Department of Health. One month later, 53,717 Florida children have tested positive for Covid-19, with a positivity rate of 14.3%, statewide data show.

In Martin County, the positivity rate among children tested is 20.5%, according to the latest state data. Reese Richardson started seventh grade in person on August 11 at a Martin County public school. But after about a week and a half, she decided to switch to virtual learning.”Kids were taking off their masks,” Reese said. “They were touching. They were close in the halls. People were breaking the rules.”

The Martin County School District is one of those districts that releases its own Covid-19 data via the news media. One day after reopening, an entire classroom was placed under quarantine.

A month later, it has reported 23 positive or presumed positive cases and has quarantined 510 students. The district has 16,500 K-12 students.Lindsey Tarpley appreciates the transparency from the district, she said. She works for the Martin County School District, and her children, ages 10 and 5, attend Jensen Beach Elementary School in the county. “I use that information to make a decision for them to attend school,” Tarpley said.

But Jill Richardson, Reese’s mom and a former teacher, wants more transparency from the district and the state.”I don’t feel like I’m getting up-to-date or accurate numbers,” Richardson said.

At least 1.1 million students were participating on August 31 in in-person instruction, the state Department of Education tweeted that day. But the data available to students and parents about the Covid-19 situation in their schools still varies from district to district.

Hillsborough County Public Schools launched a dashboard that shows 255 positive cases in students and employees since July 31. The Osceola School District posts on its website the number of students and personnel who are either quarantined or have tested positive for a given week.

Orange County Public Schools releases its Covid-19 data on Facebook on Tuesdays and Fridays. The latest post cites 18 new positive cases in 17 schools since the last report and lists 61 schools that “have had a positive case associated with an individual who has been on campus since the start of face-to-face classes on August 21.”

Depending on how data are tracked and displayed, this piecemeal approach can make it hard to keep tabs on new cases and may not specify the schools, grades or classrooms where infected students have been.Florida’s largest teacher’s union in a new TV commercial is pushing the state to release comprehensive data.

“As the virus spreads, those at the top aren’t giving us the information we need,” the narrator says in the ad. “Instead, Gov. DeSantis plays politics with our kids’ health.””When we deny what’s going on in the schools, … when we deny that information, it just causes the spread to grow much faster,” said

Andrew Spar, Florida Education Association president.On why his administration has not released school-specific Covid-19 data, DeSantis had this to say during a September 11 news conference. “It’s not like if a test is reported to the state that the state necessarily knows which school that came from.

That’s not the way it’s going,” he said in response to a question from CNN. DeSantis has asked his commissioner of education and state surgeon general to produce the information, he said. But a date for the release of the data has not been provided.

The state does not require Martin County public schools to report the number of students and staff who are quarantined or have tested positive, Superintendent Laurie Gaylord told CNN.

Students quarantined in Martin County stay home. In some cases, a teacher — considered an essential worker — with the same coronavirus exposure is required to report to work for in-person instruction the next day.

Even with all these challenges, many parents and teachers in Florida are comfortable with brick-and-mortar schooling. In Martin County public schools, 64% of students are attending in-person classes, and 36% are learning remotely.

At Jensen Beach Elementary School in Martin County, the halls are marked to facilitate social distancing. The dining hall is disinfected after every use. But desks in some classrooms are not 6 feet apart. Parents were warned social distancing would not be possible at all times, Gaylord said, so masks are required to be worn in schools.

Tarpley, the Martin schools mom and employee, trusts the district is doing everything it can to keep her children safe, she said. And she believes there is no substitute for being in a classroom in terms of the mental health and well-being of her children.

“With everything in life,” she said, “there is a risk.” 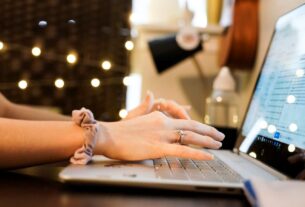 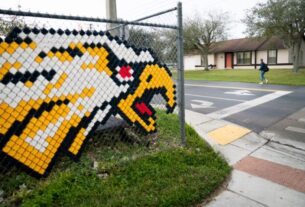 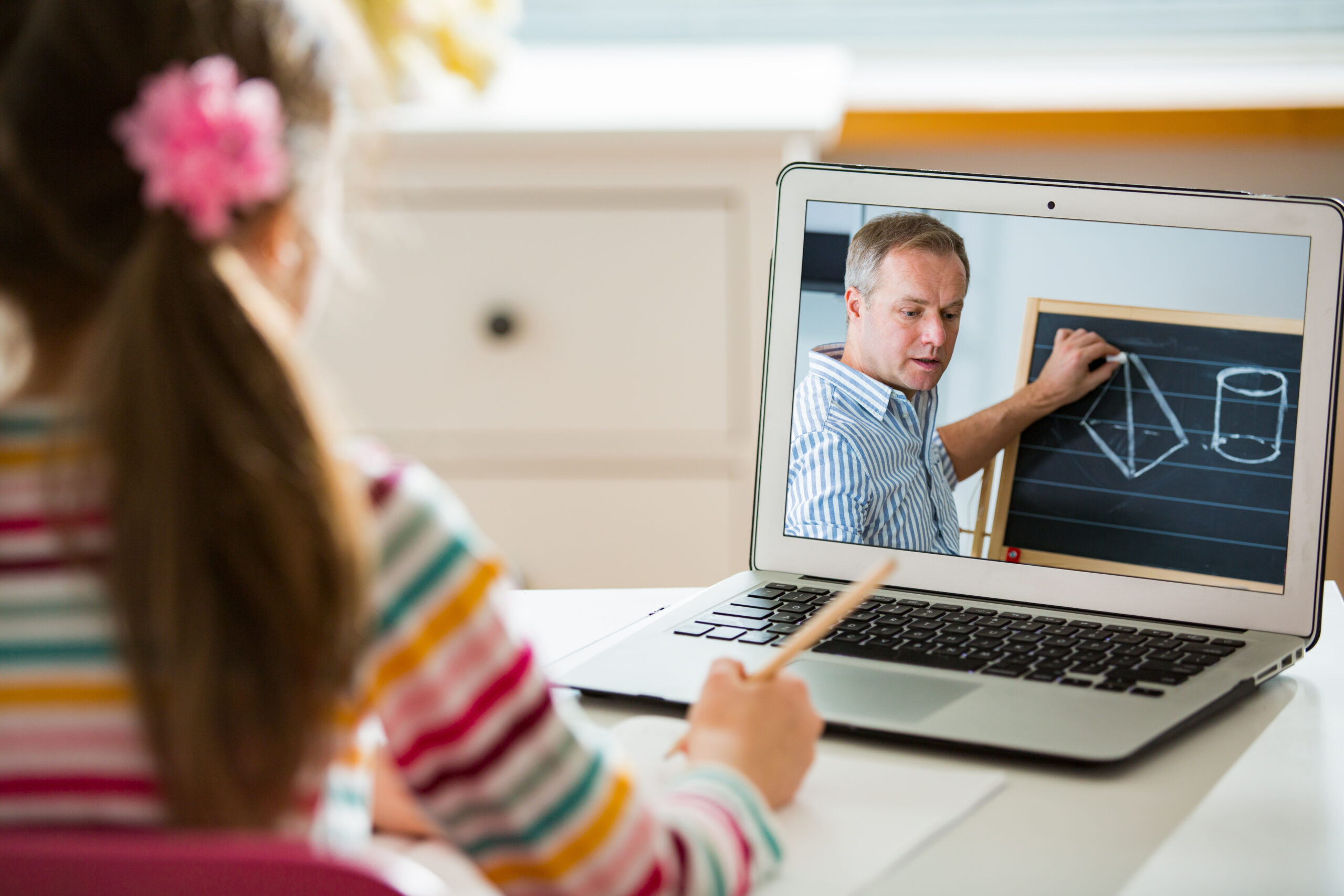