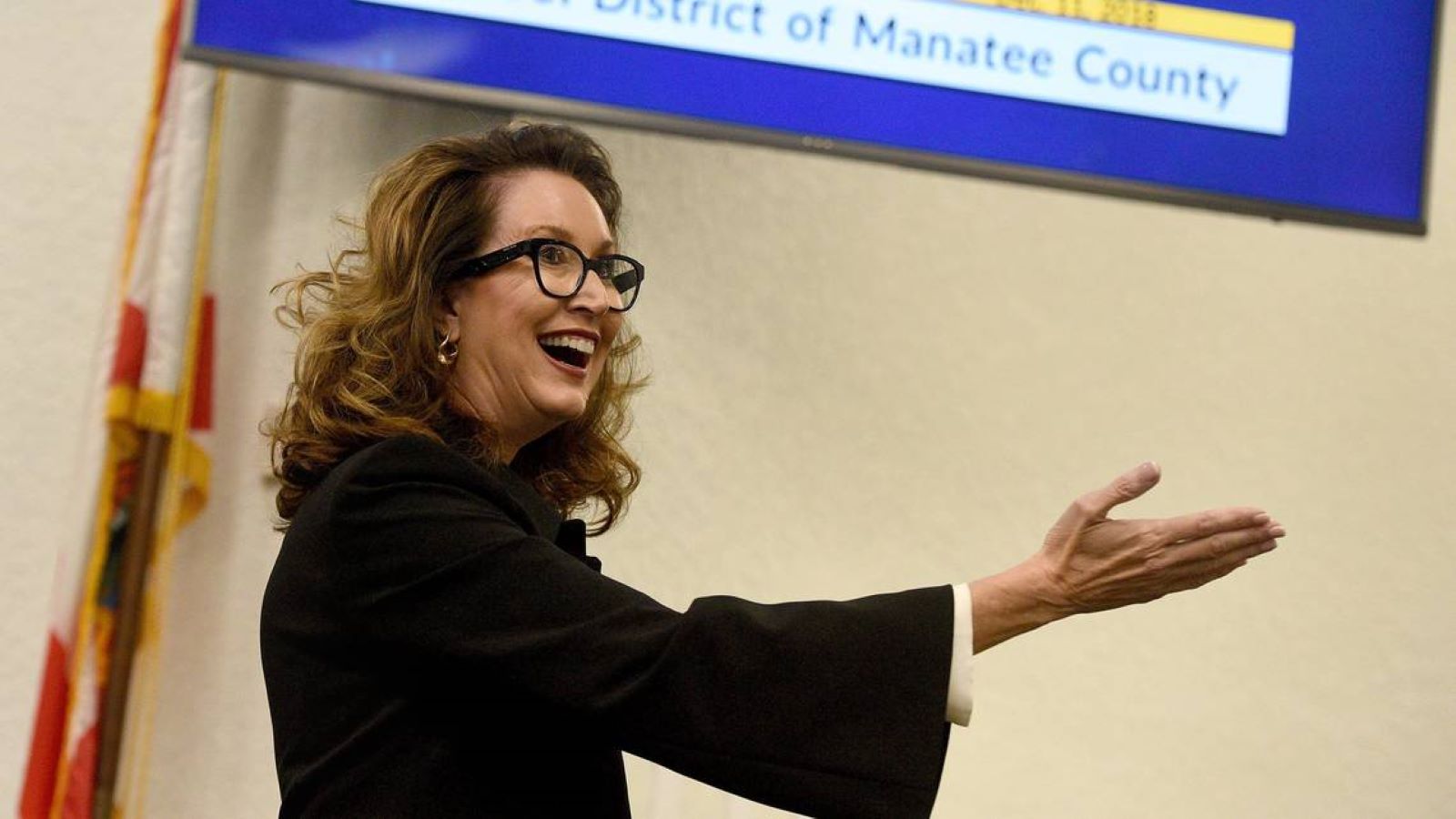 The School Board of Manatee County may vote to extend Superintendent Cynthia Saunders’ contract during Tuesday’s meeting.

The board and the superintendent must reach an agreement by Dec. 31 if they want to extend Saunders’ contract, which currently runs through June 2021. A motion to amend the agreement was added to Tuesday’s agenda at the request of board member Scott Hopes.

“There is no feasible way to actually go out and recruit somebody to take Saunders’ place by June 2021,” he said. “Nor do I think we should even entertain that with a pandemic, future budget cuts, trying to keep schools open, $250 million worth of new construction, etc.”

Hopes said he wanted to extend the superintendent’s contract through Dec. 31, 2022. His motion, the last item on Tuesday’s agenda, was likely to inspire a lengthy discussion — or debate.

In an interview last month shortly after she was elected to the board, Mary Foreman said the board should hold a national search and invite Saunders to apply. When asked if she would support a contract extension, Foreman declined to say on Monday afternoon.

“I want to approach it with an open mind and get the facts before I make a final decision,” she said.

Tuesday’s meeting is scheduled for 5:45 p.m. at the School Support Center, 215 Manatee Ave. W. in Bradenton. Face coverings are required and visitors must undergo a security screening and temperature check.

School board meetings are also broadcast live on Spectrum Channel 646 and Frontier Channel 39, as well as www.mstv.us.

“Seating is on a first come, first served basis,” the district said on its website. “Persons wishing to attend may be asked to wait outside should all of the seats inside the board room be filled.”

Sign-ups for public comment are available on the district website, www.manateeschools.net. Navigate to the “District” tab, click on “School Board,” go to “Minutes and Agendas” and choose the Dec.8 meeting.To submit a public comment in advance, send an email to public_comment@manateeschools.net. Board members can also be reached by phone (941-708-8770) or by fax (941-708-8653).

Saunders worked as the deputy superintendent of instructional services before she took the place of former Superintendent Diana Greene in June 2018.

At a meeting on Dec. 11, 2018, the school board considered an agreement to make Saunders the long-term superintendent, removing “interim” from her title. Their decision was ultimately delayed for two months.

Hours before the meeting, the Bradenton Herald discovered and reported on the findings of a state investigation into Saunders. According to a letter by Pam Stewart, then the state education commissioner, Saunders inflated the district’s graduation rate during her time as the executive director of secondary schools.

“In and around 2014 to 2016, Respondent, in her supervisory and administrative position, fraudulently inflated graduation rates for her district by instructing subordinate district employees to improperly code student withdrawals,” the letter states.

“Respondent improperly instructed district employees to code withdrawing students as ‘withdrawn to home education’ when neither the students nor the students’ parents had any intention of home schooling,” it continues.

The revelation was only a minor setback for Saunders. Even with possible discipline looming over her head, the school board went on to approve a contract in February 2019. The agreement included an annual salary of $196,000 and an expiration date of June 30, 2021.

Board members Charlie Kennedy and Gina Messenger cast the dissenting votes last year, arguing in favor of a national search. The other board members — Hopes, James Golden and Dave Miner— argued that Saunders would provide the district with much-needed stability, an opinion that was sure to resurface on Tuesday.

In May 2019, about three months after securing the contract, Saunders opted for a settlement agreement with the Florida Department of Education. Though she denied the findings against her in public statements, the settlement said she “neither admits nor denies” the allegations.

But much of the agreement — including two years of probation for Saunders — would only take effect if Saunders worked in a position that requires an educator certificate. As the district superintendent, the agreement would amount to little more than a letter of reprimand.

The Education Practices Commission, an independent group within the state education department, was quick to highlight the “loophole” and reject the settlement in October 2019.

“I’m not happy with the settlement at all,” Christie Gold, the presiding officer, said at the time. “This doesn’t seem like a sanction at all to me.”

“I feel like we hold our teachers, our coaches, to higher standards,” committee member Kathy Wilks followed. “I feel like a loophole is being taken advantage of with this.”

The case remained in limbo on Monday — more than one year later — and Saunders continued to look forward, garnering support from other leaders in the district and the community.

And on Monday afternoon, Hopes praised Saunders for braving the COVID-19 pandemic and the everyday issues that come with running a school district. Hopes said he moved to extend Saunders’ contract because Manatee needed to continue on its current path, at least for the next two years.

If all goes according to schedule, fellow board members will have the chance to respond and cast their votes at Tuesday’s board meeting.

Photo: In this file photo, Superintendent Cynthia Saunders talks to board members before a workshop. TIFFANY TOMPKINS/BRADENTON