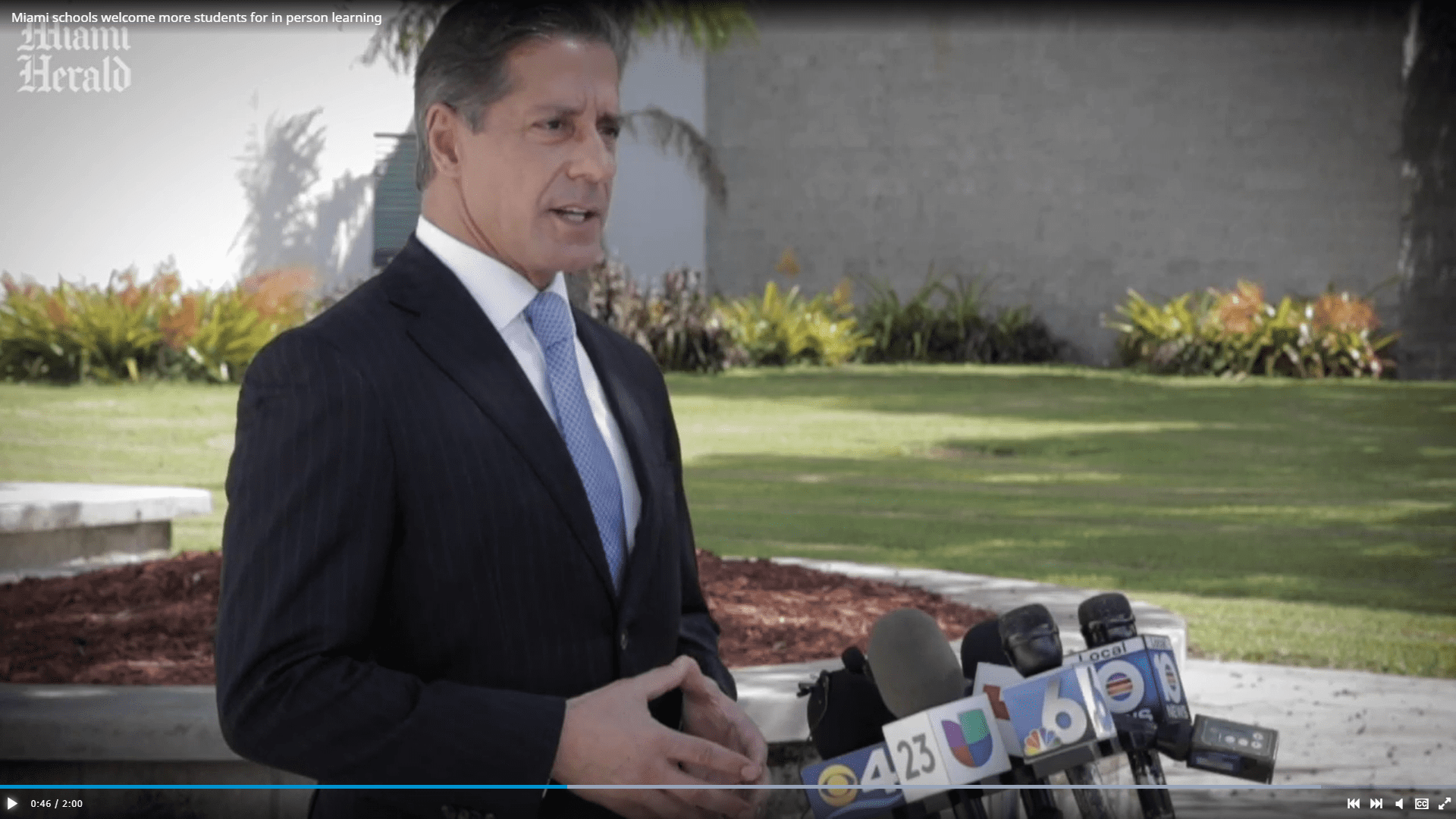 Miami-Dade County Public Schools welcomed back more than 70,000 students on Wednesday, the second and largest wave of a staggered, week-long reopening of schools for students who prefer face-to-face learning.

Every public school in the nation’s fourth-largest school district opened to greet all elementary school students plus students in grades 6, 9 and 10. They joined 20,000 students in pre-K, kindergarten and first grade plus students with disabilities on a modified schedule who returned to school Monday.

Superintendent Alberto Carvalho briefed the media outside Coral Reef Senior High and said no significant or systemic issues were detected. Buses were on time and students were fed breakfast. He did note some issues with a handful of schools that reported early-morning delays with the district’s online portal.

“Today was the day we braced ourselves for,” said Carvalho, declaring a smooth reopening. “I am reasonably happy and satisfied.”

On Friday, the rest of the district’s student population in grades 7, 8, 11 and 12 for a total of about 132,000 students will be back in school. About 50% of the school district’s 255,000 students is projected to continue with online learning.

“We expect a repeat of today with less stress,” Carvalho said, looking forward to Friday.

He said a main source of stress for many schools has been last-minute parent requests to switch their child’s mode of learning, which disrupts master schedule planning and could lead to teacher changes. Carvalho asked parents to wait until the end of the grading period, Oct. 22, to request a change if they are concerned about school capacity,

Many teachers and parents have told the Herald that more students are switching from going to school to staying online, as the coronavirus still swirls in Florida. On Wednesday, the Florida Department of Health reported 2,582 additional confirmed cases of COVID-19, with another 431 new cases in Miami-Dade.

At Coral Reef Senior High, principal Nicole Bergé-MacInnes said her staff has accommodated 400 such requests. Carvalho praised her leadership, including her handling of smooth lunch procedures he witnessed Wednesday.

“As a principal, we’re used to having to deal with things that are strategic and pivoting at any notice,” she said.

Bergé-MacInnes said she has a couple dozen teachers who are comfortable teaching online and in-person students simultaneously to accommodate specialized magnet classes.

“They’re superstars and they know how to utilize technology,” she said of her teacher corps.

United Teachers of Dade president Karla Hernandez-Mats sent a stern letter to school principals Monday regarding “pervasive” problems, from teachers not having the choice to teach dual modalities to teachers being told to come to school after given clearance to teach virtually. She suggested that school principals were directed to ignore or misapply working conditions agreed upon by the union and the district and questioned Carvalho’s assurances to the School Board regarding the reopening of schools.

Asked for his response to Hernandez-Mats’ letter, Carvalho said he didn’t read it.

Carvalho encouraged parents of students learning from home to pick up multiple free meals at every school on Tuesdays and Thursdays from 4 p.m. to 5:30 p.m., as not enough families have participated. About 73% of the school district’s enrollment qualifies for free and reduced price lunch, and through now to the end of the year, all students in the district are eligible for the meals.

Carvalho also encouraged parents and staff to report any issues to school administrators or to district offices.

“Any issues, please reach out to use,” he said. “We want to know of any problem that arises.”

Carvalho said he was not aware of any positive COVID-19 cases among students or parents. The district’s dashboard, said to be updated daily, is not reflecting any cases.

Carvalho noted issues with Sunset Elementary’s drop-off and pickup procedures, which he said is a “challenge on a good day” and begged parents for patience.

The Herald has previously reported that some Sunset parents feel their children who are learning from home have been left behind, as it’s tough for teachers to handle teaching young ones in the classroom while teaching to a group over Zoom at the same time.

Board member Mari Tere Rojas said she visited Sunset on Tuesday and was confident the school’s principal, whom she hired, would resolve that issue.

Some parents interviewed by the Herald on Wednesday outside the school said they were happy their children were back in class, but were eager to discuss several problems, from the administration’s discouraging of walking students to school to grouping first- and second-graders together, all with little to no communication.

Parents complained of spending 30 minutes in a car line when they could’ve walked across the street.

“I live two blocks away and there’s no way to drop off,” said Esteban Bernal, whose 8-year-old daughter, Gabriela, is in second grade.

One parent, who asked not to be named, found out on Monday that her second-grader son, who is not in a magnet program, is not only in a class taught virtually and in-person, but is mixed with first-graders. She said she already caught her son completing first-grade math homework.

She said the school has not communicated the reason for the change, and is writing a letter along with other non-magnet parents asking for answers.

“I feel like he’s been more left behind,” she said. “We’ve been writing to the institution and it’s been very hard to receive answers from the principal.”

She says she feels for her son’s teacher. “It’s too much for them,” she said. “It’s unmanageable to have four different groups in one class with just one teacher.”

Nina Burgos said her 10-year-old daughter, Mikaela, was excited to be back in school but was nervous because Mikaela was suddenly assigned to a new teacher.

“I’m confident that the school is going to do their best to keep kids safe,” she said.

Burgos said her daughter missed her friends, but still may pull her daughter out to enroll in a charter school or home school her if things go south in the next week or two.

“I think a lot of parents are playing things by ear,” she said.

Other parents shouted out their good experiences on social media. One parent lauded Kendale Lakes Elementary’s transparency that put parents at ease and said students have wristbands for access to school and families already received thermometers.

Another parent noted an easy drop-off at Glades Middle and warm welcomes from staff.

“@KenwoodUnited did a great job this morning!” tweeted Ashleigh Sanchez, whose 7-year-old daughter is in second grade at Kenwood K-8. “The principal even took the time to have a brief Zoom call with all parents yesterday afternoon to go through the drop off/pick up procedures/locations and answer any questions.”

Hundreds of cars lined up in both the east and westbound lanes of the Rickenbacker Causeway Wednesday morning to drop off high schoolers at MAST Academy, the first time they’ve been back for face-to-face learning since the COVID-19 shutdown in March. Teachers and parents said the school was anticipating 80% of students to return.

Freshmen and sophomores returned on Wednesday; juniors and seniors will return districtwide on Friday.

As traffic slowed in the turning lanes, several of the dozens of morning bicyclists became impatient as they weaved their way in between cars.

Some parents skipped the lineup and parked across the street at the beach parking lot to let their children out.

Gabriel Porzencanski was driving in the stop-and-go westbound turning lane traffic to drop off his sixth-grader.

“We are really excited, but we are also a bit concerned about the cases of COVID picking up,” he said. “But I think it was the right thing to do.”

Heather Hodson, 54, has been teaching marine science and solar energy at MAST for eight years. As she inched her Volvo east on the causeway, she said she was hopeful for the school year and happy to be back with her students.

Still, the virus is ever-present in her mind.

“I’m actually really excited about it, but I am a little nervous,” Hodson said.

Cristobal Munoz is a freshman at MAST, which has students from sixth to 12th grades. While he’s concerned about COVID, he said he also has confidence that the school has taken steps to create a safe learning environment.

“I’m pretty excited. It’s a new thing,” he said as he walked along the sidewalk toward the entrance of the school. “I think they’re doing a great job handling it. They have some social distancing. They’re making us wear masks.”

“It was pretty chill,” said sophomore Kenneth Gonzalez. “It was mostly teachers just trying to figure out how to teach online and physical at the same time.”

“The classes are mostly empty. In my classes, the max was three people in one of them,” Cartagena said.

This made it less hectic for him, when compared with learning in school pre-pandemic and from home during the lockdown.

“It was very calm,” Cartegena said. “It’s not too stressful as it used to be before, and not as stressful as being home only. It’s a learning experience.” 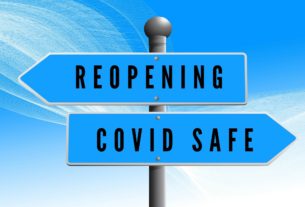 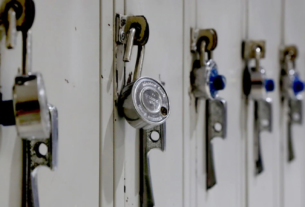 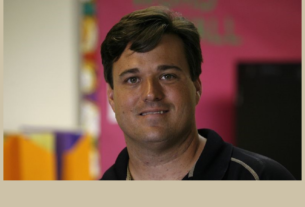