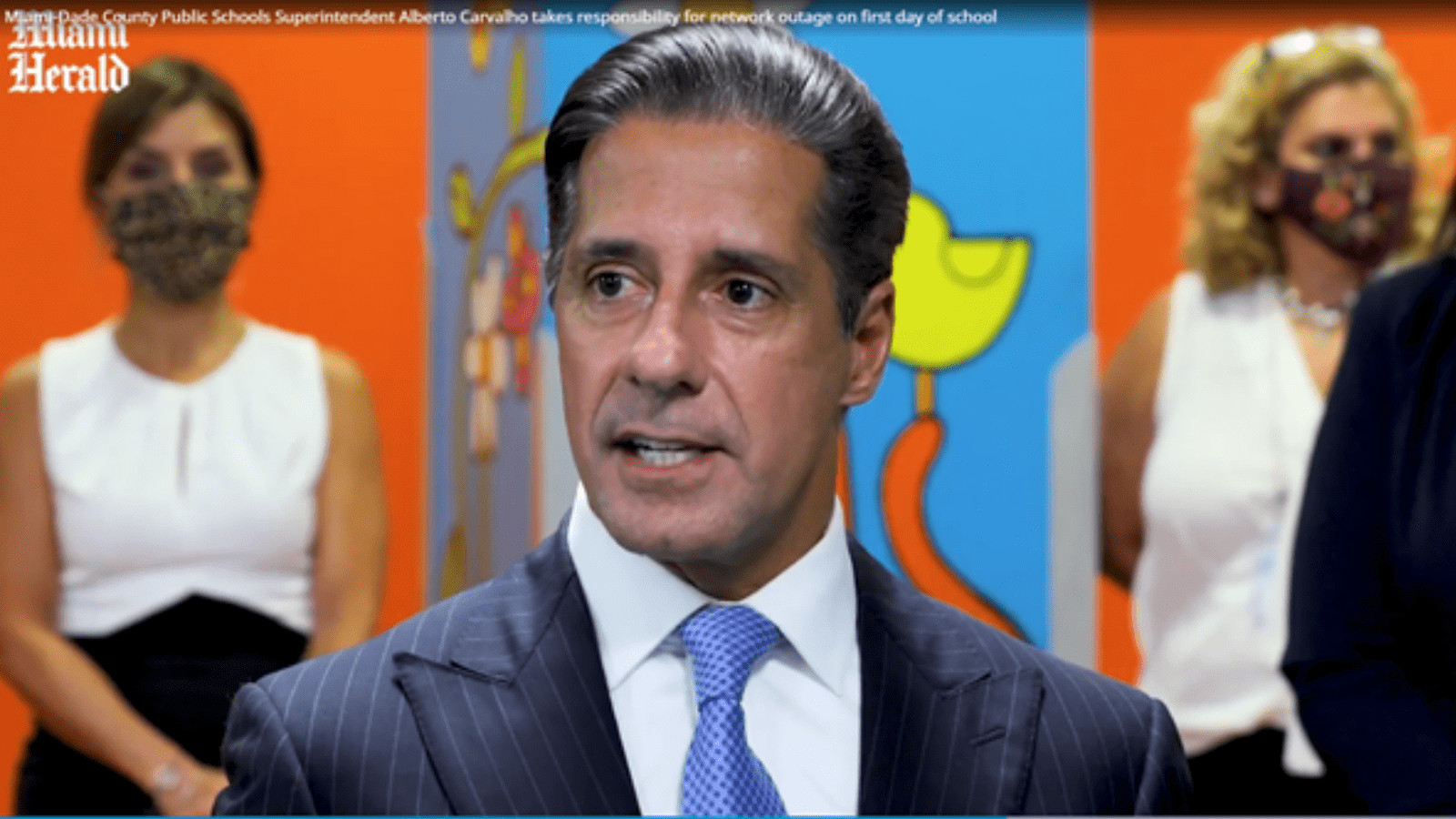 Calling it “one of the greatest disappointments,” Miami-Dade County Public Schools Superintendent Alberto Carvalho said a software failure brought the fourth-largest school district in the nation to a crashing halt Monday on the first day of the 2020-21 school year.

And the engineers working on the problem have not identified a solution.

“I would like to promise you the world right now, but this is not a problem that M-DCPS alone can solve,” he said.

The issue that caused multiple crashes, incensing parents and exasperating teachers, was detected early Monday morning. It disabled access to the district’s website, portal, email servers, grade book and attendance tracker as Miami-Dade’s 275,000 students and nearly 20,000 teachers tried to start the day in virtual classrooms amid the coronavirus pandemic.

Miami-Dade charter schools, which use the same system for grading and attendance, also lost access on their first day of school, too.

The school district issued a statement that said it would not penalize students for attendance. Carvalho also announced that students whose parents want them back in school will be able to do so by the second or third week of September, should COVID-19 cases in the county continue to trend downward.

Carvalho said an “army” of engineers from Cisco Systems, the Silicon Valley tech behemoth operating the “switch” that failed, have not determined what caused the failure in the first place.

He said Cisco has not provided the school district with a statement or timeline of when the issue will be resolved.

A Cisco spokesperson emailed a generic statement: “Cisco is aware of the issue impacting our customer’s network and we are actively engaged to provide whatever additional product or service support is required.”

The software issue was described as a switch that acts like a door to Miami-Dade’s servers. Carvalho said that switch has never faltered since it was installed five years ago.

The issue, Carvalho said, is not related to the school district’s new online learning platform, called My School Online, developed by the for-profit education conglomerate, K12. He said they’ve also ruled out that capacity was an issue, as load tests were done last week and over the weekend.

Cisco, he said, confirmed it was not a hardware issue after the “switch” was replaced. The district has no evidence of a hack.

Miami-Dade’s teachers worked over the weekend to train each other ahead of a wildcard first day back to school for students in traditional public schools. On Monday, some found that their content was deleted, though Carvalho said it was later restored.

Carvalho said 6,000 teachers opted to teach remotely from their classrooms. With intermittent service, if any, many teachers were told to go home. Some found better luck working on their personal Internet connection.

Carvalho shouted out those teachers: “They are determined. They are flexible. They are creative. They are resilient.”

Some teaching and learning did take place, thanks to teachers who found workarounds. Some teachers pivoted directly to hosting Zoom gatherings while others used another M-DCPS platform called “Clever.”

Marie Izquierdo, the district’s chief academics officer, said 208,000 students were recorded as logging in on Monday. Another 85,600 students logged in through Microsoft Teams, another platform used for special courses like Advanced Placement and dual enrollment, though many of those are likely duplicates as some teachers may have used Teams as a backup.

School district officials were confident that a solution could be found by Monday night, and if not, then the district will “provision for alternatives.” No specifics were given.

“Our primary concern is connecting teachers to students and that will happen tomorrow,” Izquierdo said.

Carvalho took full responsibility for the outage. He said he was frustrated, disappointed, and regretted the difficulty the community faced Monday.

Complaints began flooding social media just minutes before some classes were scheduled to begin around 8 a.m.

School Board Vice Chair Steve Gallon posted on Facebook: “The District Portal is down. Unacceptable!”

School Board member Mari Tere Rojas also issued a statement: “This is not only sad but it is impermissible. Just cannot understand! #WeHaveToDoBetter.

Alondra Vega, a junior at Coral Gables Senior High School, tweeted early Monday morning that the system was already faulty. When she logged in, there were no classes on her schedule. She said she was worried she would be marked absent for the first day of school.

“I think they’re trying their best to accommodate everyone, but it’s hard with the entire county trying to get on one website all at once,” Vega said. “Crashes practically are inevitable.”

Gennylia Dalien, a junior at Hialeah-Miami Lakes Senior High School, said logging on brought a number of difficulties. With the online portal down most of the day, it made it difficult to access the My School Online platform Miami-Dade Public Schools purchased from K12 for $15 million in a no-bid contract.

After finally getting into first period, Dalien’s teacher never showed up.

Broward County public schools, which resumed classes a week and a half ago, also experienced major tech issues the first day.

IN-PERSON CLASSES MAY START IN MID-SEPTEMBER

Schools that welcome students back to in-person learning will install protective equipment, such as screens between the employees and visitors, and will put up signs to remind students to wear a mask and sanitize their hands frequently, according to Carvalho, who said he’s already inspected several schools across the county.

Meanwhile, as online learning continues, Carvalho encouraged parents of children who still need devices for learning, such as laptops, to schedule an appointment with their school to pick up the equipment that they need.

“We saw going into the weekend, a surge of parents who waited until the last minute to secure a device, even after our survey. … We were in the position of doling out in the north, central and south an excess of 6,000 devices,” he said at a press conference Monday morning at Bob Graham Education Center in Miami Lakes.

“I want to urge parents if you still need a device or a hot spot, please contact your school for an appointment to pick up a device.”

Romain Bonnaud said the first day back to school was difficult for his two Coconut Grove Elementary School students, one in kindergarten and one in third grade.

He said they waited almost 30 minutes to get into the virtual classroom, although he was luckier than some parents who fought a crashing system all morning.

Along with the technical difficulties, Bonnaud saw a lot of problems with the logistics of virtual learning, especially for kindergartners.

Bonnaud said he had to sit next to his kindergartner on the first day of school to help read questions and navigate the online class. He added that almost all of the students he saw online had parents next to them for help.

In some frames, Bonnaud said he saw small groups of four or five students working together in one location. He said he understands some parents have to work, but children gathering defeated the purpose of virtual learning.

“I believe the kids will be much safer in school with a normal social distancing and a good safety protocol,” Bonnaud said. 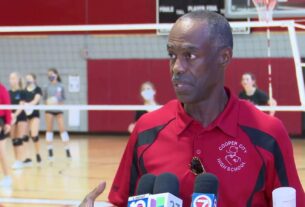 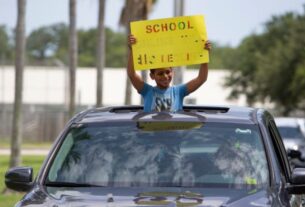 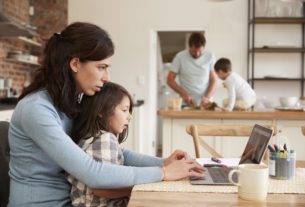