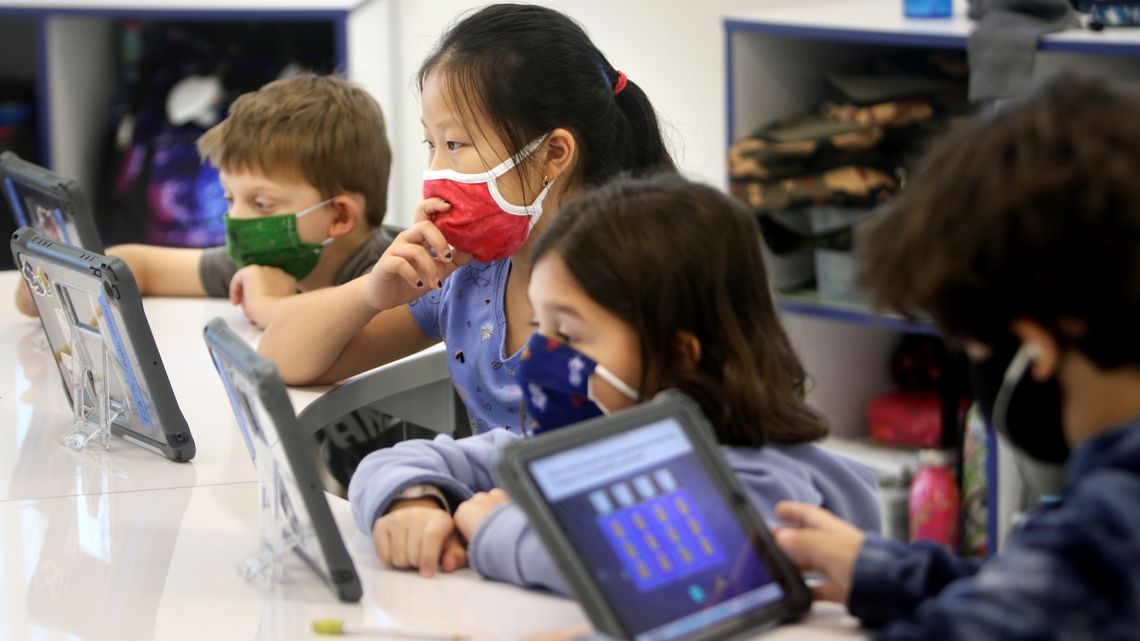 With more flexibility to adapt to pandemic conditions, some charters are filled to capacity as district schools struggle.

WESLEY CHAPEL — Sending three children back to school is a lot of work in any circumstance. But the coronavirus heaped even more concerns on Amanda Marler and her family this fall.

Her daughter was navigating the hustle-bustle of high school. Her sons were in elementary school, each with his own learning style.

To her relief, Marler found a new charter school for the younger two. Enrolling them at Pinecrest Academy in Wesley Chapel, she concluded, would make pandemic life easier and more predictable than sending them to their regular public school, Watergrass Elementary.

“We understood that charter schools didn’t have to follow the public schools’ calendar, or its rules and regulations, and we had heard public schools may not even open,” said Marler, who works in landscaping. At Pinecrest, the boys would be able to move from remote to in-person instruction without waiting nine weeks, as some public schools were requiring.

Marler appreciated the flexibility. And compared to her daughter’s public school, she has found that Pinecrest is“a lot more organized, and there is a lot more communication.”

Already on the rise in Florida, charter schools are seeing an enrollment boost this year, one more way the pandemic has left a mark on public education. Funded with tax dollars but operated independently, charters are attracting families who want a clean new building, teaching methods they see as innovative and other features they sometimes find lacking in traditional public schools.

Charter schools gained 4,854 students in Hillsborough, Pinellas, Pasco and Hernando counties collectively, according to September enrollment statistics, while traditional schools in those districts started the semester with 18,056 fewer students than last year.

Traditional schools have since regained many of those students, making it difficult to assess exactly how much momentum the charters picked up. But the uptick stands out during a time of decline for most institutions.

School district records suggest a greater willingness by charter school families to allow their children to attend schools in person. That could result from parents’ belief, shown in studies, that charter schools are safe. Or, as Pasco district spokesman Steve Hegarty suggested, it could stem from the fact that not all charter schools offer distance-learningoptions.

If the pandemic accelerates the growth of charters, it will have profound implications for traditional schools, which still make up the bulk of Florida’s public systems. A shift of nearly 5,000 Tampa Bay area students to the charter sector will take approximately $35 million out of district budgets this year.

Charter school advocates often point out that districts that lose students to charters no longer shoulder the expense of educatingthem. But districts have fixed costs as long as all their schools remain open.

And the losses are not just financial. Charter schools also draw parents who want to take an active role in schools and are therefore a valuable resource. The loss of that energy is often acutely felt at traditional public schools.

Samuel E. Abrams, director of the National Center for the Study of Privatization in Education at Teachers College, Columbia University, said it’s too early to predict the pandemic’s long-term impact on the charter movement.

But logically, he said,charter schools are attractive in a pandemic because “they’re usually smaller. They’re usually in newer facilities with better ventilation. They are likely to have younger teachers, and those teachers are not going to be unionized.”

If the teachers perceive work conditions to be dangerous, he said, “they can’t raise their voices in opposition.”

Earlier this year, district teachers and their union leaders argued forcefully to keep schools closed to students as long as infection rates were above 5 percent. When the state pushed to reopen schools anyway, complaints surfacedabout cleaning materials and work conditions.

At the start of the school year, roughly half of students were learning remotely and thousands did not turn up at all. Hillsborough was down by 9,613 students compared to the previous year, according to its 20-day enrollment count. But charter schools in the district saw a net increase of 3,177 students.

In Hernando and in Pasco, overall enrollment growth was lower than projected and happened primarily in the charters. In Pinellas, charter school enrollment held steady, while traditional schools lost 3,891 students.

Hillsborough superintendent Addison Davis said he suspects parents were soured by school officials’ back-and-forth deliberations in July about when to reopen.

A marketing campaign is now under way, with the theme “Safe, Social, Successful,” aiming to bring families back to Hillsborough schools this spring, whether studentslearn in person or remotely. The $55,000 campaign will be funded through office supply company rebates.

“If we get eight students back, it pays for itself,” Davis said.

Specific to the pandemic, charter schools have shown themselves to be freer to close down a wing or an entire campus for sanitizationafter a coronavirus case. District schools, urged by the state to conduct only “surgical” quarantines, have not closed any schools.

Plato Academy, a charter group based in Pinellas County, closed its Palm Harbor campus for two days in September because of widespread quarantines among the staff.

Plato’s chief academic officer Matt Gunderson said he’d be reluctant to take such a step in the future. But he added, “I think all but one of those parents said, ‘Thank you for putting safety first.’”

Charter schools also tout sophisticated devices — including 360-degree cameras at the Charter Schools USA group — that make it easier for teachers to reach in-person and remote students simultaneously. That allows for a more fluid transition when, for example, a student must spend a week or two at home because of illness or quarantine.

At Gulf Coast Elementary, a new charter school in Spring Hill, children can learn in pods of four without wearing masks. When they move around campus, or join other students for special activities, they mask up, principal Melinda Heater said. Cleaning crews sanitize the building nightly with a chemical fogger.

After Halloween, Heater said, administrators learned that about 75 percent of familieshad taken children trick-or-treating. As a precaution, they imposed a mask rule for two weeks, giving 10-minute mask breaks to groups of students at designated times.

Heater said that, as of November, there had been one coronavirus case at the school. “A student tested positive, and we found out it happened after a family member tested positive,” she said. The student and others in the pod were placed on quarantine and participatedfully in the class through Zoom.

All but five of Gulf Coast’s 114 students are attending in-person, she said.

As at Gulf Coast, the vast majority of students are in school. Principal Sara Capwell moved over this year from Hillsborough’s Waterset Charter, part of a group that lured more than 1,000 students from that district’s Eisenhower Middle School in recent years.

The pandemic has made it difficult to allow parents to volunteer, she said. But Innovations Prep has a strong presence on Facebook, with recent videos that show firefighters visiting a kindergarten class, third-graders racing in a boxcar derby and an honor roll assembly for the sixth grade.

“I think one of the reasons why the parents have just great trust in us is because we do communicate so much,” Capwell said. “It’s like you’re there. That’s what we’re trying to do, is have that transparency. Because that’s part of the whole isolation that people are feeling.”

“We have direct contact to the teachers,” said Amanda Marler, the parent at Pinecrest. “All of their emails are available to us. They’re good at returning phone calls. At the public schools, getting ahold of a teacher can be almost impossible.”

In many respects, charter schools strugglewith the same challenges the pandemic threw at district schools: how to manage student and adult fears, and how to help students develop social skills at a time of physical separation.

Small group activities had to be rethought, Capwell said. Children sit on individual stools to discourage them from getting too close. Small group time is limited to avoid close contact for more than 15 minutes, in accordance with guidelines from the Centers for Disease Control and Prevention. Children cannot share art supplies.

As in district schools, difficult conversations have been hadabout mask requirements. Aware of the political divide that has shaped attitudes about the pandemic, Capwell tries to keep those discussions focused on safety.

Since the school districts compiled early enrollment counts, some have reported changes. Fluctuations happen in typical years, too, as families return from out-of-state vacations and migrant farm workers follow the growing seasons.

An added complication this year was the population of families who, fearful of the virus or disrupted by unemployment, simply kept children home.

”Our school administrators and staff have been going to door-to-door, chasing every lead to locate these students and to encourage them to return to school,” said Karen Jordan, spokeswoman for Hernando schools.

There has also been a gradual shift from distance learning in the district schools to in-person instruction. Jordan said 80 percent of Hernando’s students are now attending school in-person. She said that overall, charter school enrollment held steady, attributing the year’s increase to the opening of Gulf Coast Elementary.

Elsewhere in the region, the percentage of students attending in-person was about 10 points higher at charter schools at the beginning of the school year. Those gaps closed over the months, as children who were distance-learning migrated back to school buildings. In Hillsborough and Pinellas, the latest numbers show the proportions are roughly even.

But the Hillsborough data also shows charters are continuing to grow, having picked up 149 more students since the 20-day count.

SuperintendentDavis said that competition from charters makes him all the more determined to improve the district’s schools, and market them effectively.

“My job is to compete every day to make sure we’re their first choice,” he said.

This story is part of a collaboration with Frontline, the PBS series, through its Local Journalism Initiative, which is funded by the John S. and James L. Knight Foundation and the Corporation for Public Broadcasting. 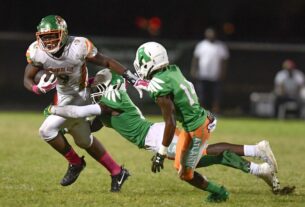