For two nights in the final week of July, about 4,000 people across Florida turned on their computers and sat down for hours to watch the Florida High School Athletic Association try to hash out a plan for the fall sports season.

To a certain growing population of the state, the two meetings and the decisions it did — and, too often, didn’t — yield were just another piece of evidence about the issues with the state’s governing body for high school sports: The decision-making seemed slipshod.

Some board members seemed to entirely disregard medical advice and delve into borderline COVID-19 conspiracy theorizing. As a whole, the FHSAA seemed out of touch with a huge percentage of its member schools, particularly those in major metropolitan areas and, specifically, COVID-slammed South Florida.

The protracted, sometimes-contentious, often-disorganized process will theoretically end Friday when the FHSAA’s Board of Directors meets in person in Gainesville to finalize the state’s plan for playing fall sports, including football, amid the coronavirus pandemic. After pushing back a decision date from July, the 15-person board will weigh three proposed options, ranging from a September start date to a November start.

The damage, however, has already been done, in Gallon’s opinion. At the first meeting in July, the FHSAA’s Board voted to start the fall seasons without any delays, even as Florida was a hotspot for the pandemic. The FHSAA faced state-wide backlash from coaches, athletic directors and even superintendents, and held an emergency meeting a few days later to postpone the start of practices until at least Aug. 24 and meet again in August to finalize plans.

In between those two July meetings, Gallon announced he would propose MDCPS withdraw from the FHSAA. On Wednesday, the School Board of Miami-Dade County will meet for the first time since Gallon’s announcement and he still plans to proffer the agenda item to discuss the possibility of the county pulling out of the state association. He has three co-sponsors and needs five votes for it to pass.

Its passage wouldn’t mean Miami-Dade is out, but it would be the formal start of real discussions about how to achieve independence.

“I’m very optimistic that we will be able to really explore that conversation and that option very seriously,” Gallon said. “There’s a perception that some of the decisions appear to be out of touch across the board. … I do believe, to some extent, that you’ve got to have the appropriate representation and sometimes where there’s enhanced involvement — enhanced capacity at the local level — sometimes there’s an opportunity for enhanced results and we don’t know that. We’re going to examine that and hopefully, after the board meets and the item passes, we’ll come back with some recommendations on how we should move forward.

WHY WOULD MIAMI WITHDRAW?

This fall decision is only one small part of why Gallon felt it was finally time to explore withdrawing from the association.

The FHSAA livestreamed both its July meetings and it shed a light on the dysfunctional decision-making process. One of the most striking revelations was how quick some were to disregard the recommendations of the FHSAA’s own Sports Medicine Advisory Committee and not just the suggestion to delay sports indefinitely, but also the safety measures — like daily temperature and symptom checks — it recommended be implemented statewide.

“The catalyst for this last decision was obviously one that involves the health, safety and welfare of our children, which is a non-negotiable for me and non-negotiable for any of us that are charged with overseeing the educational experiences and opportunities of our students,” Gallon said. “That was the most conspicuous decision, the most conspicuous indicator as to why we need to take a hard look at this relationship.”

The apparent lack of preparedness was also striking as the first meeting dragged on for five hours with little accomplished. The FHSAA originally planned to not livestream this upcoming meeting before more backlash from coaches, administrators and even its own board members prompted executive director George Tomyn to about face Monday, and stream the meeting. To Gallon, it was telling the FHSAA would try to avoid transparency around such an important decision.

The idea of Dade County withdrawing from the FHSAA isn’t totally new, even the first time something will formally be proposed. South Florida coaches and administrators have long griped about the FHSAA, and the idea they would be better off without it. Last year, Miami-Dade and Broward counties combined to win 7 of 8 football state championships. South Florida drives the FHSAA’s biggest moneymaker and often feels left behind by an association 300 miles away, tasked with managing a large, diverse state.

In 2018, Gallon, a former principal at Northwestern, led the charge for reclassification in the FHSAA, which ultimately split up Miami’s urban schools and paved the way for the county’s public school-led dominance of the football state championships in 2019. Just in February, Gallon proposed the FHSAA revise its revenue-sharing structure.

Even if the FHSAA figures out an equitable plan Friday, the associations problems have already been amplified, which is why Gallon believes now is the time to consider the most drastic action possible.

“This is not Steve Gallon waking up,” Gallon said. “I’ve been on top of some of this and I’ve been laying out the case, but I could not anticipate that such an egregious decision in the midst of a global pandemic that has perplexed the entire nation, state and Miami-Dade in particular would’ve been handled that way.”

School Board Vice Chair Dr. Steve Gallon III speaks at a press conference in Miami about the coronavirus and school closures on Friday, March 13, 2020. SEBASTIAN BALLESTAS 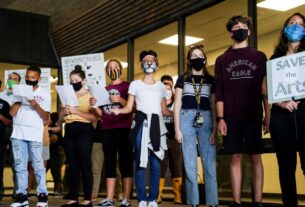 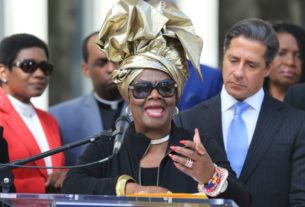 Miami school board member wants anti-racism curriculum. All but one colleague agreed